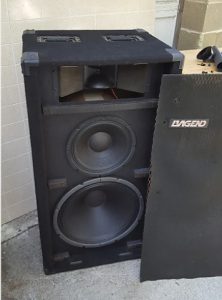 This AF-1 was purchased at an estate sale of the late Danny Federici who was an American musician, best known as the organ, glockenspiel, and accordion player and a founding member for Bruce Springsteen’s E Street Band.

In 2014, Federici was posthumously inducted into the Rock and Roll Hall of Fame as a member of the E Street Band.