Bill is the bass player for the group Superfly Symphony, a high energy dance band focusing on disco hits of the 1970’s.

Check out this recent write up on their newly released original song, “On The Dance Floor”

In Bill’s words, “Henry was great to deal with. Spent a lot of time listening. Result was a rig design that sounded like what I described. Overall, awesome!! Thanks.”  Bill is shown here with his rig at the Bag End facility in Algonquin. 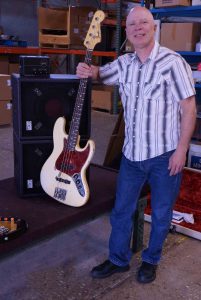