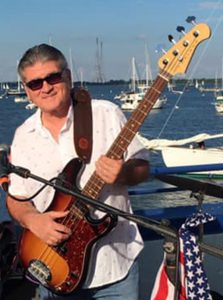 Metro New Yorker and long Time Bag Ender Daniel Prine, literally makes it look like he is on vacation wherever he plays.

A Bag End user since the 90’s, Dan says “I had an S15XD and S15D for many years, I sold them, went through a few different brands and have returned to Bag End, they just sound great!”

Shown here is Dan’s latest Rig. Two each of the S12-N and S15-N. “Spectacular tone and presence… and they are very manageable to move… not too heavy,” adds Dan. Dan also uses Bag End powered 15”s, a D10E-D and a D12. They are all in the rotation.