Just like the state of Texas, the Galleria Mall in Dallas is huge! 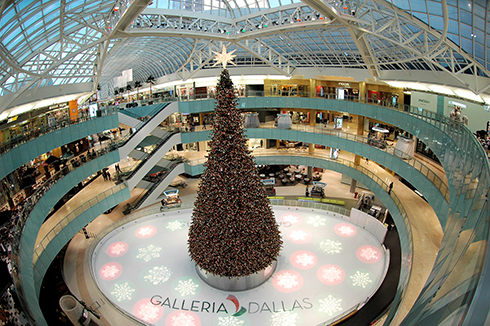 Located at the busiest intersection in Texas, it’s no wonder the Galleria is called “the most shopped” center in the Dallas-Fort Worth metroplex. Designed to reflect the feel of the Galleria Vittorio Emanuele in Milan, Italy, the atrium style super mall includes more than 200 stores and restaurants, anchored by Macy’s, Nordstrom, Saks Fifth Avenue. It also encompasses three attached office towers, a Westin Hotel and an ice rink.

The Galleria underwent a $25 million-plus renovation that included the complete reconstruction of its centerpiece ice rink. The three-story central atrium of the mall was extensively reshaped, including construction of new ceilings and a glass facade. As part of the project, the old ice rink was completely excavated and rebuilt from scratch.

Omniplan Architects, Inc., and VCC, the mall’s general contractor, called in Fort Worth sound system designer and installation contractor Electro Acoustics & Video to design a new sound system to serve both ice rink users and the shoppers in the central area of the atrium. The master plan called for a sound system that would facilitate live performances by guest artists, pre-programmed multimedia shows produced by the mall management, and day-to-day music playback for skaters.

Erich Friend, senior project engineer for Electro Acoustics & Video, said he set about to design a sound system that would allow the wide, dynamic range demanded by the mall operations. “During peak holiday sales periods the ambient noise levels can exceed 90 dBA and during off-season morning hours the levels can be a modest 40-50 dBA,” Friend said. “So, we had to design a system that would not interfere with the retail business and restaurants that surround the rink area while providing a substantial energy level for the reinforcement of live productions.

When it came to the selecting a subwoofer system, the contractor faced two major problems. EAVI determined that the only practical location for the bass speakers would be behind the dasherboards, or sidewalls, of the ice rink. The concrete perimeter of the rink had already been poured by the time EAVI was under contract. So EAVI found itself facing twin difficulties: a very limited amount of space in which to work and the very real problem of high humidity conditions because of the close proximity to the ice surface.

Chris Jordan, president and owner of EAVI, solved the major hurdle. ”We negotiated with the general contractor to have some recesses cut into the already formed concrete perimeter, behind the dasher boards,” he said. “That provided us with sufficient room to fit some sort of subwoofers.”

“We selected BAG END subwoofers for several reasons, Friend added. “We knew they would lay down a solid bottom-end that would rock the skaters and drive the presence of live performance,” he said. “In addition, BAG END engineers were eager to work with us to develop a custom enclosure that could be integrated within the limited space behind dasher boards and withstand the humid conditions near the ice surface.”

Working with Barrington, Ill., loudspeaker manufacturer, Friend selected 10 BAG END S10E-I custom cabinets, each containing one 10-inch subwoofer, to be placed behind the dasherboards around the rink perimeter. To accommodate limited depth, BAG END engineers developed a custom cabinet that was only 5 7/8 inches deep, compared to the depth of the standard production model, which is 11 ½ inches deep. The custom enclosure was 18 inches high by 15 inches. Normal dimensions for the standard S10E-I are 12½ inches high by 14 inches wide by 11½ inches deep.

To combat the high humidity problem, BAG END utilized its proprietary outdoor waterproofing process to seal the cabinet, circuitry and the subwoofer itself from the elements, in this case, primarily humidity. When used in conjunction with a BAG END INFRA-M signal processor, as was the case here, the subwoofer is capable of a flat response down to 18 Hz.

“Completing the sound system, 25 JBL high frequency speakers with stainless steel grilles are located around the rink perimeter. An additional 26 JBL ceiling speakers and 19 ceiling subwoofers surround the atrium on each of the three levels,” Friend said.

“Mall patrons gather at the railings on all levels overlooking the ice during special events, so the speakers on each level are individually equalized and delayed so that the composite sound from the rink and the nearby speakers is consistent,” he added.

Ultimately, Friend concluded, “The most challenging part of the installation was scheduling – our crew could only work from 9:00 p.m., after the mall closed for the night, until 6:00 in the morning, which made for some long nights.”

David Kirby, director of the Galleria ice rink, is very enthusiastic about the new sound system. “It’s a great sound system,” he said. “We used to rent sound systems for our shows and they involved a great deal of temporary equipment and cost us thousands of dollars. Our new, permanent system sounds as good or better than the big rental systems and is practically invisible.”

When the mall’s renovation was completed, Daniel Upton, regional vice president for the Galleria’s management company, General Growth Properties Inc., told the Dallas Morning News, “This is one of the major retail destinations in the country, and people expect it to be something special. You have to keep up with customers’ expectations, and we’ve just exceeded that.”