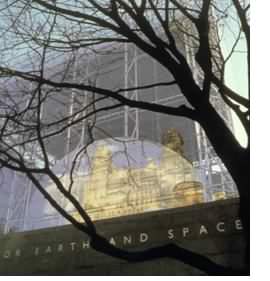 New York City’s American Museum of Natural History houses the breath-taking Hayden Planetarium. On the west end of Central Park, sits the magnificent glass enclosed structure, which has been called “the most spectacular addition to the museum in its 150-year history.

The Hayden Planetarium is located inside an 87-foot reflective metal sphere. The sphere is perched on a tripod that creates the effect of floating, within a 95-foot high glass cube. In the top half of the sphere lies the Space Theater. A typical planetarium will display the night sky as seen from earth on an overhead dome. However, the Space Theater “flies” the audience through the night sky. As one science writer said after viewing the show, “Why look at the constellations when you can fly among them.”

Stars They Are Aplenty

Actual astronomical data is used as the basis for the planetariums 3D presentation. The National Aeronautics and Space Administration (NASA), the European Space Agency’s Hipparcos, and the museum itself, combine to provide a data base map of more than two billion stars. Jim Sweitzer, the astrophysicist who re-created the universe for the museum, said: “This is not your grandfather’s planetarium. It is modern, contemporary science … it uses the very latest technology to display our modern conception of space.”

Renowned architect James Steward Polshek designed the Hayden Planetarium. However, Auerbach + Associates of New York and San Francisco, designed the key elements of lighting, sound, staging and technical systems. Hayden has been described as the most technologically advanced space theater in existence. 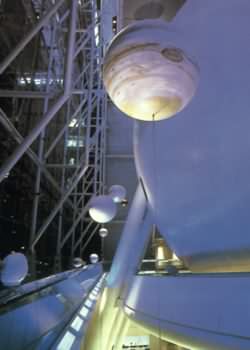 A $3.5 million, one-of-a-kind Zeiss Mark IX Star Projector lies at the heart of the Space Theater. Working in concert with the Zeiss Mark IX are seven coordinated Prodas projectors. In addition to a SGI Onyx2 InfiniteReality2 workstation which generates the dome graphics. As a result, this is the most modern star and planet projector ever built.

These amazing visuals are supported by a dynamic sound system. The sound system broadcasts the virtual reality show within the dome of the theater, as well as the pre-show area. Paul Garrity, Auerbach’s project manager, directed the project and worked with Auerbach senior consultant Dan Mei.

The technologically advanced 3D spatial sound system totally envelopes listeners in the excitement of the show. During the show the audience is transported on a five-billion-light-year tour of the cosmos. The system provides multi-channel movement of sound effects and music, synchronized to a moving, projected imaged.

Sending sound around the room is the job of the Space Theater’s main matrix system. The Level Control Systems (LCS) SuperNova digital audio processing system handles the job. Meanwhile, LCS CueStation software controls the process. The dimensional surround sound system speaker network consists of a series of full-range speakers. Mounted in concentric rings above the perforated metal projection dome is the first set. Next, a primary cluster is located at the top of the dome. Further, are eight channels in a mid-level ring. As well as twelve channels at the dome’s horizon.

How Does Bag End Fit In?

The subwoofers are one of the keys to the effectiveness of the sound system. The loudspeaker system is specifically designed to reproduce very low frequencies, and that’s where BAG END shines. Garrity said: “the goal was to drive the subwoofer system without having it too loud.” He also did not want the sound to bleed into the “Big Bang” laser show in the room below the theater. “We wanted the room to feel like 110 dB without actually generating anywhere near that level,” he said. “We didn’t want people to feel like they had been at a rock concert.”

“BAG END S18E-I subwoofers were selected for the job. The subwoofers are driven by a BAG END ELF-1 processor. BAG END offers speakers with excellent sound in compact enclosures. Some manufacturers offer subwoofers almost as an afterthought, BAG END provides a wide selection that we have used on many other projects as well,” Garrity added.

Garrity said: “The final piece of the puzzle are the Aura Bass Shakers mounted in custom boxes attached to each seat in the theater. They’re a low frequency driver that vibrates the object they’re attached to. For example, when the Planet Jupiter flies by, there’s a vibration in the seats – which just adds to the total experience.”

The end result is that 20 times a day, seven days a week anyone can fly through billions of stars to the ends of the cosmos and back again – in 30 minutes.