Laying the Groundwork for Sound 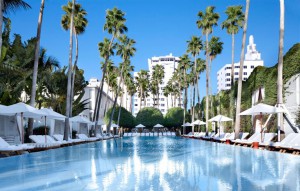 It’s been called “the coolest,” and “the hippest hotel in South Beach.” Indeed, the Hotel Delano in Miami Beach is truly an Alice in Wonderland of destination hotels, combining fantasy, indulgence and tranquility in a couture package.

Owned and operated by New York-based Morgan’s Hotel Group, the 238-room Delano, at 1685 Collins Avenue, is one of the most elegant boutique hotels in the United States. Ian Schrager and Phillippe Starck have always had a talent for containing worlds within their hotels-and the Delano is no exception.

Guests are treated as royalty. Pampered by a superbly trained staff, guests find the atmosphere serene, peaceful and totally relaxing by day. They can go to the movies, play volleyball, swim, sleep and enjoy treatments at the Agua spa. The private beach features peach and white tents stocked with beach balls and fruit.

The piece de resistance is the pool where one can spend an entire day underwater. There’s music (yes, underwater music) , a waterfall, and separate spots for playing, floating around, and even snacking. The poolside bungalows are on Miami’s most wanted list, offering a tasty glimpse of the sea and the pool, plus a decadent reputation that probably derives from their close proximity to the bar.

But after dark, a party atmosphere takes over and the Delano is where it’s happening in South Beach. Every space within the hotel is its own sphere. Hot in-house destinations include the Rose Bar, the Sea Bar and the Blue Door restaurant-which, incidentally, is co-owned by Madonna, always packed with visiting stars, models galore, local celebrities and, of course, hotel guests.

A key to the party atmosphere at the Delano is its pulsing sound. And when it came time to upgrade the sound system in the hotel’s public spaces, the owners turned to Clair Brothers Systems, a company that has designed and installed audio systems in several Morgan’s Hotel Group properties. A Blair Brothers team headed by Jan Luszczek designed a comprehensive sound system that consisted of more than 120 loudspeakers in 10 different zones, from the lobby all the way to the poolside bar and private cabanas.

The foundation for all good sound systems is its bass range. Luszczek selected Bag End subwoofer speaker systems for the quality, clarity and reliability of the bass sound reproduction. “We went with Bag End D12E-I dual 12-inch subwoofer cabinets because of the required SPL and the cabinet’s compact size,” he said. “We use one channel of a QSC CX-902 per subwoofer for a total of 900 watts per box (4 Ohm load). That’s more than the 400 watts recommended by Bag End’s engineers, but with continuous use, the Bag End subwoofers have proven to be extremely reliable.”

Luszczek installed eight Bag End subwoofer systems in three different zones, each with its own Bag End INFRA signal processor, which give the system the capability of reproducing flat bass frequencies down to 8 Hz. Two D12E-I enclosures are located in the Sea Bar, along with a combination of JBL in-ceiling loudspeakers, as well as some loudspeakers from the previous sound system that were reused in this location.

The lobby in front of the Rose Bar and the Brasserie Restaurant is where the DJs setup for parties,” Luszczek said. “Six Clair R2D loudspeakers supplemented by four Bag End D12E-I subwoofer systems provide the sound in this area. The Rose Bar itself and the Brasserie received their own speaker packages consisting of Speakercraft in-ceiling speakers and a pair of Bag End subwoofer systems.”

“It can get pretty loud some nights in the Rose Bar lobby, when the DJs crank it up,” he said. “Normally we have a few dB of clean headroom in connection with properly set limiters, and we set the Bag End INFRA signal processors rather aggressively. The ultimate LF extension is not the goal there but it’s nice to know that it is still there when the music isn’t pounding.”

The outdoor dining area is an extension of the indoor restaurants and provides a similar audio playback quality. Volume can be adjusted in three different dining areas independently. Clair Brothers also designed a self-contained audio system for the pool deck. It consists of three separate zones with volume controls for every cabana, the beach and each side of the bar. A separate audio feed provides music to underwater loudspeaker.

A recent guest at the Delano commented afterward, “This is the place to throw caution to the wind and live it up. The lobby is done in soft whites and soothing browns, the pool and cabana area are breathtakingly beautiful…Don’t bother with the other hotels in Miami. They will not even come close to the Delano”