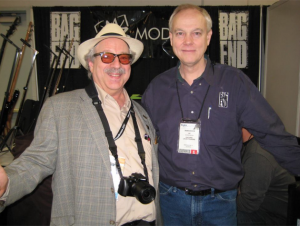 Jon Hammond (left) is an organ, accordion, piano and guitar player. Jon’s successful career is based on his musical talents and his passion for the music industry. As a result, Jon has performed with many legendary players over the years. In addition, Jon is a clinician and product artist. Jon has introduced many innovative products to music stores and their customers. The two main products of his career, are the Excelsior Accordian and the Digital B3 Organ. Jon is shown here with Jim Wischmeyer of Bag End at a NAMM show.

Playing 7 nights a week in Boston’s notorious Combat Zone next lead to touring with successful show band Easy Living. Jon then became house organist at the exclusive Wychmere Harbor Club Cape Cod MA where he played private parties for Tip O’Neill Speaker of The House. Hammond returned to SF for a reunion concert in 1980 with Eddie Money and members of Tower of Power. Next, Jon moved to Europe where he lived and played for a number of years, still playing annually where he has an enthusiastic following. Jon began hosting his own TV show “The Jon Hammond Show” in 1984 and is now in 27th year on cable TV in Manhattan and heard daily on KYOU Radio HammondCast Show with regular appearances at international trade shows.