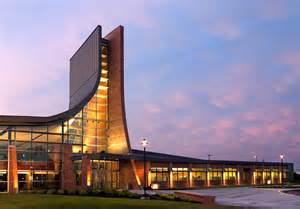 Dayton, OH – Joan Kroc, widow of Ray Kroc, founder of McDonald’s donated a substantial amount of money to the Salvation Army of America to build community centers in underserved cities across the country. The Ray & Joan Kroc Corps Community Center in Dayton, Ohio opened its doors on May 8th, 2010.

Included in the Center, along with its extensive recreational and social facilities, is a movie theater/lecture hall incorporating sound reproduction equipment, at the heart of which are seven Bag End loudspeakers and subwoofers and a Bag End INFRA-MXB processor. The theater was designed by John Poe Architects and the sound reproduction equipment specified by KJWW Engineering Consultants and installed by Copp Systems Integrators.

“Excellent sound in a multipurpose theater like this only results when the system and the room acoustics work hand in glove,” says KJWW sound engineer Jon W. Mooney. “When it is done right, it will be difficult to tell where the sound system ends and the room acoustics begin. Bag End has always provided a superior beginning for sound in my projects,”

The primary function of the theater is to show films on its 98- by 182-inch screen, using a Panasonic PT-DW1000U Full HD DLP projector and a Denon Blu-Ray DVD player. Sound for films is provided by Yamaha P Series amplifiers and a 5.1 Bag End speaker system that uses three PCrystal-I speakers for the left, center and right speaker channels, supported by two D18E-R subwoofers and two TA6000-I surround-sound speakers. Copp Systems also custom-designed a speaker bridge to hold the speakers in place behind the micro-perforated movie screen.

The system was installed with very few problems, and has received rave reviews from visitors and staff alike since the theater opened.