The Two Most Important Loudspeakers In The National Constitution Center 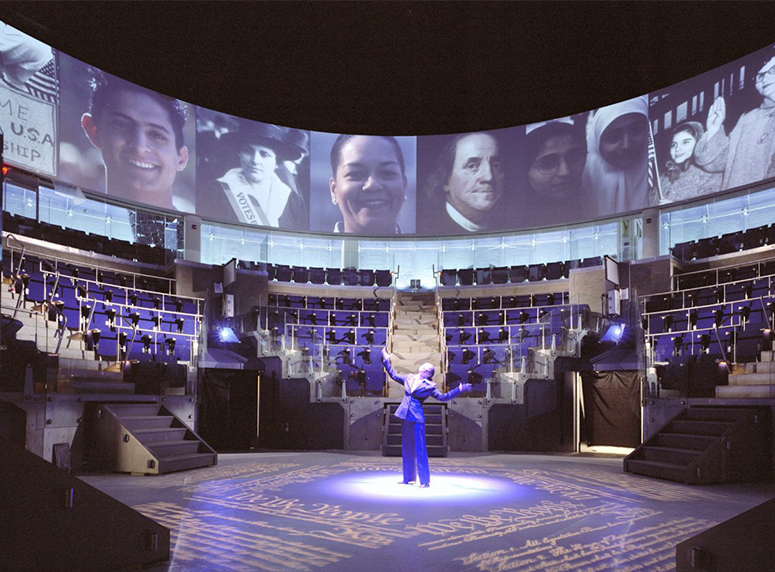 Visitors’ first stop when they enter the National Constitution Center is the Kimmel Theater. Here they are introduced to the museum via a multimedia program called, “Freedom Rising,” which features a state-of-the-art audio system creating stereo imaging and surround effects throughout a 360-degree environment. Only two Bag End speaker systems are used in the museum, but they are arguably the two most important systems in the building, because they supply the low frequency foundation for the audio system in the theater.

Philadelphia claims to be the birthplace of the United States of America. It was in Philadelphia that the Declaration of Independence was signed in 1776, the Articles of Confederation uniting the thirteen colonies were ratified in 1781 and the Constitution was adopted in 1787.

So it is fitting that the document considered to be the cornerstone of modern democracy is honored with Philadelphia’s newest museum: the National Constitution Center. In it’s short life, it has already played host to nearly 80,000 visitors.

The elegant two-story museum serves as the northern most anchor of Philadelphia’s Independence National Historical Park, often called America’s most historic square mile. The museum tells the dramatic story of the U.S. Constitution through more than 100 interactive and multimedia exhibits, photographs, sculpture, text, film and artifacts in 67,785 square feet of exhibit space.

James P. Wischmeyer, president of Barrington, IL.-based loudspeaker manufacturer Bag End Loudspeaker Systems, said recently, “BAG END is proud to play a role in this building that recounts and preserves the history of the Constitution of the United States.”

“We needed to provide the low end of the program material in such a way that we would not drown out and rattle the adjacent exhibits, “LaDue said. “We found that the Bag End subwoofers, along with the INFRA processors, provided a clear, well defined bass that maintained their transient performance even at very low levels. Couple that with their relatively small size and we had a perfect match.”

The main exhibit gallery, The American Experience, utilizes more than 100 media elements to develop the themes contained in the Constitution’s preamble, also designed by Jaffe Holden Acoustics. Sound absorptive finish materials and specialty audio components tailor the experience of each individual exhibit and maintain a balanced overall gallery soundscape. These cutting-edge audio delivery technologies are integrated into many of the exhibit structures, emphasizing the museum’s message about the contemporary relevance of the Constitution.

The National Constitution Center was established in 1988 by Congress with the passage of the Constitutional Heritage Act and signed into law by President Ronald Reagan. Ground was broken for the Center on Sept. 17, 2000, 213 years to the day the U.S. Constitution was signed, and it opened its doors for the first time Independence Day, 2003.

The museum is an independent, non-partisan, and non-profit organization dedicated to increasing public understanding of, and appreciation for, the Constitution, its history, and its contemporary relevance, through an interactive, interpretive facility.

The architectural firm of Pei Cobb Freed & Partners designed the Center. The firm is responsible for the expansion of the Louvre and the East Building of the National Gallery of Art. Ralph Appelbaum Associates designed the Center’s visitor experiences and exhibition hall, and Jaffe Holden Acoustics, Inc., designed the state of the art audio system.

Appelbaum’s interpretive museum design is at the core of the most important museums in recent history, including the United States Holocaust Memorial Museum in Washington, D.C., the Museum of African American History in Detroit, and the Newseum in Arlington, VA., which brings to life the business of gathering and disseminating news. The Newseum, by the way, also utilizes a Bag End sound system.