Opera In The Park, Madison, WI

by Flora North
Madison, WI – More than 12,500 Wisconsnites flooded to Garner Park in Madison in late July, picnic baskets and lawn chairs in tow, to attend a free evening concert. You might guess that they were excited to see rock ‘n’ roll or country, jazz or blues, but you’d be wrong. The draw was instead, opera, the lone musical genre almost foreign to the outdoor concert scene. For the sixth straight year, Madison Opera organized the $200,000 event, dubbed, “Opera in the Park,” which involved the full Madison Symphony Orchestra, a 60-voice-choir, and four guest soloists of international fame, along with all of Madison Opera’s regular vocalists. 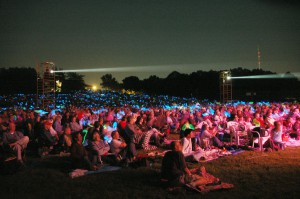 The ensemble performed all the hits of opera, a host of lesser-known, but equally amazing pieces, lighter operetta, musical theater and three pieces form the company’s upcoming season. At no cost, Sennheiser provided a collection of Sennheiser and Neumann orchestral mics, Bag End Loudspeakers provided the PA, and pro audio retailer and Madison denizen, Full Compass provided the remainder of the gear. Mike Pappas of Sennheiser, Henry Heine of Bag End and Jonathan Lipp and Kevin Peckham of Full Compass donated their time to ensure the production was nothing short of transcendent. 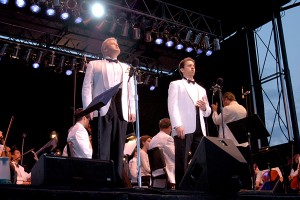 But how does one convey opera, in which the power and emotion of the unamplified human voice plays such a pivotal and defining role, to such a vast, outdoor crowd? It’s not easy. After a few shaky years in which the only thing going for them was the park’s sloped, theater-like seating, Full Compass stepped in with better gear and a whole new outlook on sound reinforcement for the event. Allan Naplan, general director of the Madison Opera, explained, “The physicality of producing powerful sound with only the resonance of the human body takes tremendous talent and a lifetime of training. It’s not the sort of thing you want to short-change by using a body mic or a headset mic. Close-miking might be fine for other genres, but it destroys the natural acoustics of a well-trained opera singer’s voice.”

Pappas continued the thought, “The obvious, if difficult to implement, solution is to mic the vocalists from a distance. Along the front of the stage, we placed our Sennheiser MKH 800 mics, the sort usually reserved for fine, indoor classical recordings, and the vocalists addressed them from about three feet back. Fortunately, with their training, we were able to get 80 to 90 dB even at that distance.” 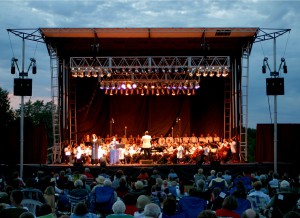 The team used three additional Sennheiser MKH 800s to capture the left, center and right sections of the orchestra. They used two Neumann KM 140’s in an ORTF configuration for the main choir pickups with two Neumann KM 184D digital mics as flanks. All of the analog mics were preamplified and converted by Grace Designs and EMM Labs units. The FOH system consisted of a Yamaha OMV96 digital console with built-in effects, two clusters of three 1000w powered 2 x 12-inch Bag End Crystals (run in stereo) that were flown in front of the stage with one 700w powered 2 x 10-inch Crystal per side for center fill and two powered 21-inch and two powered double 18-inch subs. A Goldline TEF25 Tefpro audio analyzer was used to calculate the 135 ms delay time for two towers set 138 feet in front of the stage where an additional cluster of two stereo 1000w powered 2 x 12-inch Crystals were stationed on each side. A Shure P4800 4×8 digital system processor handled the entire speaker matrix.

“Every singer had complete control of his or her voice and artistry,” said Naplan. “The stage sounded very natural and responsive, which was comforting to the musicians and singers and allowed them to deliver a performance worthy of the finest theater.”

“From, the audience’s perspective, the event sounded loud enough to hear, but un-amplified,” added Pappas in a nod to the almost always unmet goal of true sound reinforcement. “That’s what you get when you put the very best high-end gear in the hands of talented professionals who are passionate about making Opera in the Park a success”