Bag End Loudspeakers are found in several Smithsonian Museums. This recently opened National Museum of African American History and Culture is a 400,000-square-foot facility which includes exhibition space, a theater and café, staff offices and an education center. Many custom made self powered subwoofers were designed to fit into tight spaces and were cosmetically covered. Single 10 and single 12 models are used throughout the facility. 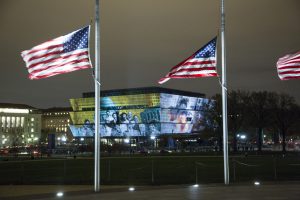 The audio programs and systems in the museum were tuned and calibrated to have the best combination of tonal shaping and control of sound bleed between exhibits.

One of the most challenging exhibits at NMAAHC is the Musical Crossroads Gallery, which features no less than 15 separate genres of music all playing in the same open gallery. The Smithsonian executive producer walked through the gallery and gave SH Acoustics, the designer of all the audio and acoustic delivery solutions, the following quote: “The audio installations were brilliant!  I could stand in front of the Genre video monitors and hear – clearly – the audio for each video.  It felt like it was coming from the screen (even though I saw where the speakers were placed); and each video was distinct and clear, with no interference from the rest of the audio in the gallery.  It was a great experience.”