As Printed In Sound and Vision
Subwoofer Review, 2014

Bag End’s is a unique approach to subwoofing. All other subs in this survey—and indeed all others known to me—are designed for as low a fundamental resonance of the driver/enclosure system as possible, the “usable response” being generally considered the area above that point. Bag End inverts standard practice by designing the resonance to occur as high as practical, around 63Hz in this case, and then operating the subwoofer below that point. The putative advantage is that a sub’s output below resonance may be weak and growing weaker with declining frequency (at the rate of 12dB/octave, this being a sealed-box system), but the shape of the rolloff is quite smooth and predictable, lending itself to correction by a processor with the mirror-image response just before the power amplifier.

Bag End’s ELF-1 is a 2-channel processor designed to supply just that kind of correction, as well as integration with the main speakers, subwoofer driver protection, and “concealment” of audible distortion. This concealment is achieved with a sliding filter circuit that kicks in at the very lowest frequencies under high-level conditions to prevent audible distortion or even driver damage.

The ELF-1’s rear panel contains the AC power-cord socket and six XLR connectors for inputs and outputs. A bank of switches on the left side of the front panel enables the user to control various bass parameters, including the low-frequency cutoff (the lowest being 8Hz), contour (low-end boost of 1–7dB), gain, polarity, and the threshold at which electronic concealment engages. Another bank of switches controls various highpass parameters, including crossover frequency, gain, and polarity. Shortly before this article went to press, the ELF-1 was supplanted by the Infra-M processor, which is said to offer the same sound quality in an easier-to-configure package. However, I used the ELF-1 for my testing.

The 21-inch-diameter driver used in the S21E was the largest in the survey, offering nominally 36% more radiating area (“bore”) than the 18-inchers that will appear in Part 3. In this case, the increase in sheer driver real estate does not necessarily transfer directly into pants-flappage factor. In a system that rolls off at 12dB/octave throughout its operating range, it takes a considerable low-frequency boost to produce the same sound pressure at the lowest frequencies that 1W produces at 64Hz. At 32Hz, the power required to perform this feat is 16W; at 16Hz, the power required is 256W and at 8Hz the power is a sobering 2kW—well beyond the manufacturer’s recommended limit of 800W. And at frequencies where one feels bass as much as hears it—below roughly 25Hz—the aforementioned electronic boost, and the ear’s natural insensitivity to bass at low to moderate playback levels, combine to impose excursion demands that a single driver—even a 21-incher—simply can’t meet. 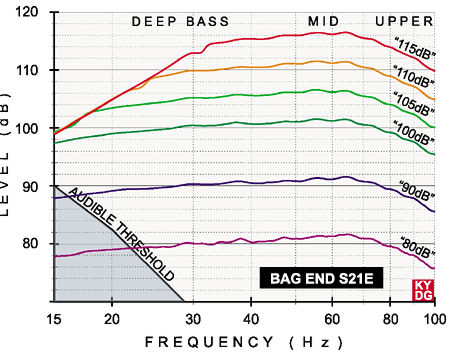 Frequency response at higher levels (Fig.5): Nominally flat down to 10Hz at all levels up to and including 95dB; at higher levels, the ELF-1 outboard processor imposed a protective low-frequency rolloff whose engagement frequency slid upward with increasing playback level. Turned up 5dB, to 100dB, for example, the processor rolled off the sub’s response below 13Hz; at 105dB, the rolloff kicked in at around 18Hz; at 110dB, the response was attenuated below 24Hz; and at 115dB, the same rolloff point occurred at around 32Hz.

Dynamic range: The protective low-frequency rolloff of the outboard processor is also apparent in the reduced output of the S21E at higher levels clearly visible in the power-compression curves (Fig.6). Maximum output before audible distortion on Linkwitz shaped tone-burst tests (Fig.7) ranked roughly in the middle among the 12 subwoofers in the survey. 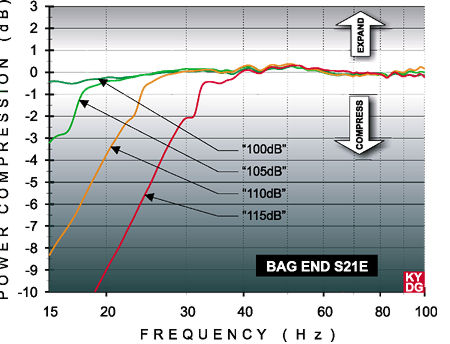 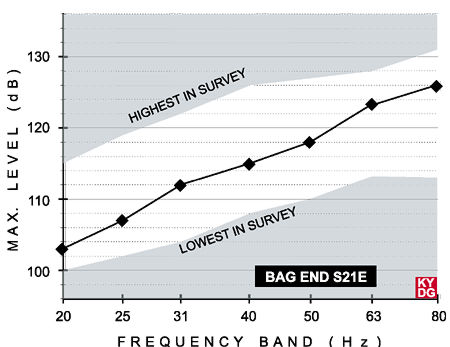 Total harmonic distortion: At 95dB and above, the S21E produced more than 20% THD when playing a 20Hz test signal (Fig.8). Moving the test signal up one octave, to 40Hz, produced less than 10% distortion at all playback levels, including 115dB. 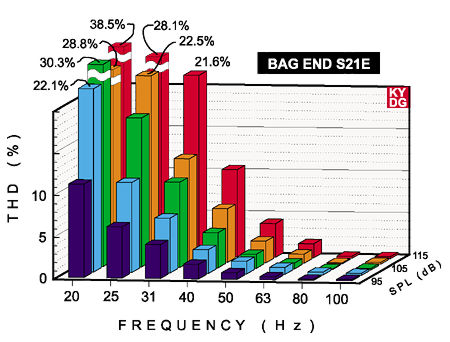 Sensitivity: 89dB/2.83V/m at 40Hz. Because it’s a closed-box system operating below resonance, sensitivity declines at 12dB/octave.

Impedance: Nominally 8ohms throughout the 15–100Hz range tested, minimally 6.9ohms at 15Hz. The S21E is not a “difficult” load, but the downward tilt of its uncorrected response throughout its range suggests that those seeking flat response down to 20Hz at realistic levels should pair the unit with as powerful an amplifier as can be found, preferably with ratings of >400W into 8ohms. (Suitable candidates might include the Lab.gruppen used here, a Bryston 7B or 14B, or any of several of the larger Crowns, including the new I-Tech models, Studio Reference, or MacroTech MA3602 or MA5002.)

Listening
The Bag End’s success with the “Jurassic Lunch” CD track (Figs. A1 and A3) depended on how high I set playback level. At levels you might use to demonstrate your system to a favorite aunt—which translated to sub-only peaks registering a shade under 100dB at 2m on the dino clomp at 1:03—the S21E managed to capture a big enough chunk of the recording’s sub-20Hz content to suggest a fairly massive creature treading the ground a stone’s throw away. Turned up 6 or 8dB, to a creepy, straighten-up-in-your-seat level, the infrasonic ground-shake component faded a bit in relation to the rest of the spectrum, confirming the measured data, which showed the ELF-1 processor interceding at the very low end to keep the 21-inch cone from shredding itself with over-excursion. 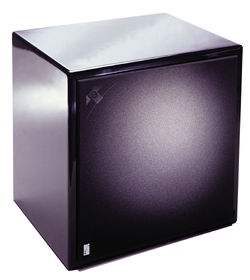 The Bag End landed just south of the top rank on the U-571 clip (Fig.B3). Although the S21E emitted none of the woolly, cardboardy distortion that blighted other competitors at demo-worthy levels with this passage, it couldn’t replay the most taxing explosions and rumblings with a crisp impact that rivaled that of the Genelec HTS6 and Velodyne DD-18. Nevertheless, the overall effect was impressive enough, in the more familiar hi-fi sense, to leave little doubt that this clip merits inclusion in Bag End’s future trade-show exhibits and dealer demos.

With all speakers but the S21E disconnected, Bag End’s 21-incher managed a peak level of 110dB on the Pearl Harbor clip (Fig.D3) before a slight rattle intruded. The S21E produced quite noticeably higher peak levels than those managed by the SRT and Adire units (which notched 105dB and 106.5dB, respectively), and 2dB shy of what the big ServoDrive belted out.

But my Pearl Harbor torture track amounts to more than just a test of how loud a sub will play: The sustained barrages of anti-aircraft fire create a near-inferno in and around a driver’s voice coil, which has the effect of reducing overall output and robbing gun discharges of the individuation and definition you’d hear if you were anywhere near the real thing. During the listening sessions, it occurred to me that, despite Cuba Gooding Jr.’s best efforts at the guns, it wasn’t enemy Zeros taking the punishment, but Bag End’s driver. The repetitive nature of the fusillade also gives the ear a chance to latch on to distortions that might otherwise pass unnoticed in shorter, nonrecurring signals.

Yet with all that electrical energy being turned into heat, and all the potential for audible distortion, Bag End’s flagship single-driver sub held together astonishingly well. I noticed some progressive softening of overall level over the clip’s duration, and some dynamic blunting of individual discharges, too, but these and the distortion products were mild enough under my test conditions to pass unnoticed under real-world listening conditions.

Of all the test selections, I was most eager to see how the Bag End would cope with the brutal 7Hz and 18Hz drones in the infamous “F’ing Irene” scene of Black Hawk Down (Fig.C3). At approximately the same overall playback level you’d experience in a good commercial cinema, the lower of the two subsonic components was nowhere in evidence perceptually (it won’t be in that cinema, either). The 18Hz component made its presence known palpably, if not quite as pants-flappingly as with the Genelec HTS6 reviewed in Part 1 or the ServoDrive in this installment. To gauge audible distortion, I disconnected the main speakers and just listened to how cleanly these three infrasonic champs rendered the 18Hz chopper rumble. The Bag End came in second in this particular face-off, edged out by the massive Genelec, though it should be noted that when I played the scene with the main speakers reconnected, the distortion products of all three were masked by higher-frequency chopper noises. This suggests that, in actual practice, all three might well sound equally clean on this passage.

The big, reverberant bass-drum strokes on “March of the Exorcists,” from the Casper CD, don’t go especially deep or call for lease-breaking playback levels, yet they’re surprisingly revealing of how much, or little, a subwoofer possesses the quality of finesse. There was a wispy halo of fuzziness surrounding the drum strokes in sub-only listening mode that all but vanished when I listened again with the main speakers connected. (This is explained by the fact that, in this case, the distortion products lay in the same general area as higher-frequency recorded sounds, thereby being suppressed by auditory masking.) Overall, this result was well above average.

The final cannon blast of Tchaikovsky’s 1812 Overture sounded a little light at the very low end compared to the unfettered wallop the big Genelec packed, but was otherwise crisp up to 110dB. The bass-drum whack three seconds into Holst’s First Suite showed some flutter and hash at Lexicon settings of –2 and above, but was otherwise deep, crisp, and clean. And Béla Fleck’s “Flight of the Cosmic Hippo” was textbook perfect: fully fleshed out and jauntily slip-slidey, with no sense of cabinet bloat or one-note drone.

Inspection of the frequency-response graphs produced by the dozen subs in the survey reveals that the Bag End plumbed the infrasonic range deeper than even its largest competitors, reaching an honest 10Hz. But those familiar with the curves of equal loudness will view the frequency-response graphs knowing that just because the microphone shows flat response down into the deepest bass doesn’t guarantee the listener will experience it that way. For example, getting the 10Hz T. rex temblor in “Jurassic Lunch” to be just barely audible in dead quiet surroundings requires something like 100dB at the listening position. Even if you have a power amp with the grunt to get it to that level, and factoring in the inevitable low-end boost, or “room gain,” that comes along for free in typical domestic settings, the 10Hz component may still be below the threshold of audibility in most rooms.

It may sound as if the Bag End’s infrasonic prowess is nothing but an academic achievement: If it can’t play the really deep stuff loud enough to be heard or felt, why bother? Fair question. But remember—each doubling of the number of subwoofers in a closed, domestic-sized room will typically boost output by 5–6dB. Then consider that the S21E is compact enough for the well-heeled film lover to consider buying two or more. Admittedly, it might take four or even eight S21Es to make a convincing showing across the full 10–20Hz octave in most residential settings, but, leaving aside mechanical floor- and chair-shaking systems, there’s no other readily available method of delivering the kind of oh-my-god infrasonic wallop that puts the audience in the physical grip of the filmmaker.

One last point: If you’ve got the dough and real estate to spare, don’t shrug off the sub-20Hz content I’ve shown in the reference waterfall plots as unintended artifacts—say, scraps of subway rumble or HVAC noise—that somehow slipped through the filters during the mixing process. The content is program-related and meant to be there. So, okay, as a hardware matter, how did the engineers at Todd-AO who snagged an Academy Award for Best Sound for Black Hawk Down monitor all that gut-twisting infrasonic content—all those rumblings I’ve mentioned that lie just beyond the reach of even refrigerator-sized subs? They used big Bag End subwoofers—22 of ’em.