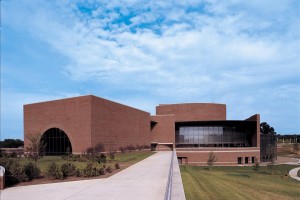 The Blanche M. Touhill Performing Arts Center has become is the signature structure for the campus of the University of Missouri at St. Louis. Designed by world-renowned architects Pei, Cobb, Freed and Partners, the 128,000-square foot facility features two performance spaces — the Anheuser-Busch Performance Hall, a 1,625-seat proscenium theater, and the E. Desmond and Mary Lee Theater, a 300-seat music and theater hall.

The center also includes an enclosed atrium to showcase art exhibits and accommodate cultural, academic and corporate events and is equipped with catering facilities, beverage service areas and an outdoor terrace and gardens.

Touhill, who retired as chancellor of the UM-St. Louis campus in December of 2002, spearheaded the effort to raise funds for the new structure. While the state allocated $40.4 million towards its construction, Touhill also led the effort to raise another $11.6 million in private donations. 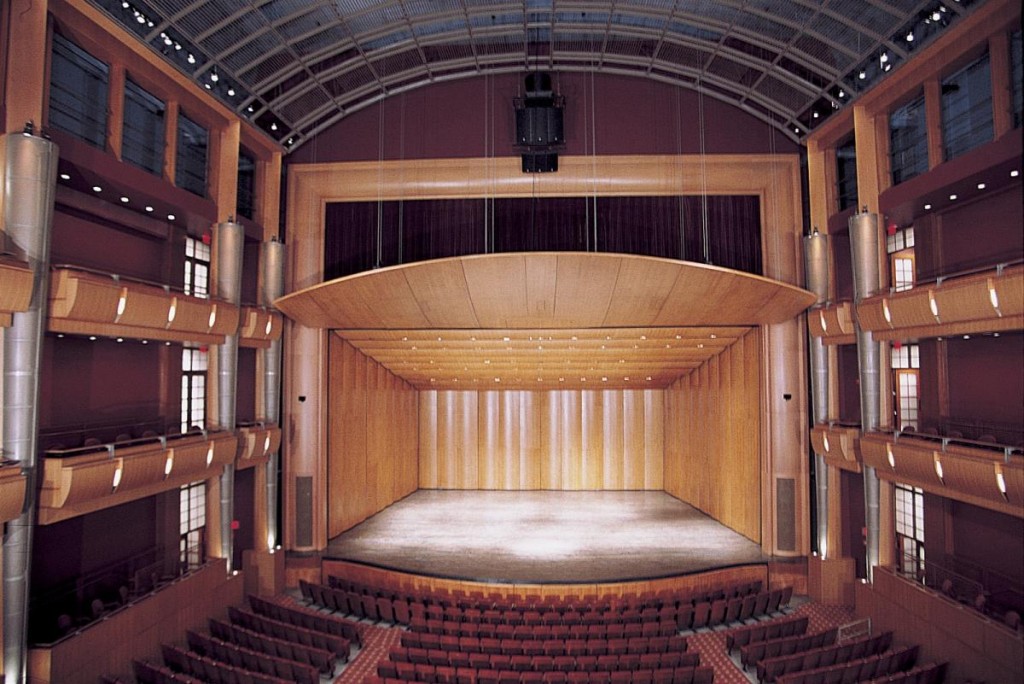 The Anheuser-Busch Theatre is an intimate, modern version of a classic opera house, combining both European and American features. The forward part of the auditorium is formed by side seating galleries framed by column pairs, which also support the four corners of the latticework barrel vault overhead. The effect is reminiscent of the Garnier’s 1875 Paris Opera, but the materials and design are unquestionably modern. The audience is seated on three levels—orchestra, dress circle, and upper circle. The tiers do not stack one above the other as in a classic European hall; rather each successive tier is set back one row, creating a more relaxed and uniquely American feel. There are 896 seats on the main orchestra floor, more than half of the total seating capacity. The dress circle has 277 seats and the upper circle has 457.

The Lee Theatre is a flexible space that can be used for music, dance, theatre, exhibits, receptions, and banquets. It is a single room, meaning the audience and performers share the same space. However, a combination of permanent and flexible features gives the room its unique character. The “audience end” of the room is framed by a U-shaped seating balcony with control rooms for video, audio and lighting. Facing the balcony is the half round feature window at the “stage end” of the room. Within the U-shaped balcony, at the center of the main floor, is a 36-foot by 24-foot long by 3-foot deep seating pit that is filled with adjustable platforms.

The theatre is very flexible, with three main configurations. With the seating pit filled in, it can be an open flat floor suitable for receptions, art exhibits, banquets, or rehearsals. It also can be a conventional “end stage” theatre with seating opposing the “stage” end of the room. The main bank of chairs telescopes out from below the center balcony. Matching loose chairs are set up on stepped platforms within the seating pit, and the audience faces a “stage edge” formed by the depth of the seating pit. In its third configuration It can be a thrust theatre, with seating on three sides of a stage platform set up within the seating pit.

The physical flexibility of the two performance spaces demanded an equally flexible sound system. Called on to design this very demanding system was Theatre Projects Consultants of Ridgefield, Conn.

“Main purpose of the sound system in the Anheuser-Busch Theatre is to support a variety of performances: plays, productions, jazz, rock shows. We specified BAG END and Electro-Voice speaker systems, powered by Crown amplifiers,” said Tom Kostusiak, sound system designer for Theater Projects Consultants. “There is a center cluster above the stage and left-right proscenium clusters where the BAG END D18E subwoofers are concealed. There are also three layers of horizontal configuration BAG END TA6000-S under-balcony speakers.”

The audio mixing console is a 40-input Soundcraft K2 series with signal processing provided by Ashly Audio, BSS, Klark-Teknik and Lexicon. There is a dedicated Mackie 24-track digital audio recording system, which can receive signals from the mixing console, microphones on stage, or any combination of the two.

In the Lee Theatre, multiple “mix” locations were provided to accommodate various seating configurations possible in the theatre. And both microphones and portable speakers are can be shared with the Anheuser-Busch Theatre providing a great deal of flexibility. The Lee Theatre sound system can also be configured as a multi-track recording facility for music events. The Lee boasts BAG END subwoofers with Electro-voice FRX series loudspeakers. Signal processing is provided by Ashly Audio and Klark-Teknik. Amplification is provided by Crown.

“We specified BAG END D18E-I subwoofer system in the main auditorium and BAG END S18E subs for use in the small theatre or as part of a portable PA for the atrium,” Kostusiak said. “I have always been a fan of the BAG END subwoofers for their ability to output extremely low frequencies with such high fidelity and low distortion.”

“The first time I heard them was at the LDI trade show, the year they were introduced,” Kostusiak said. “I was in the “loud” room and amidst the thumping low end of the various booths, there was this random ultra-low frequency rumble. We finally tracked the source down to a manufacturer of high intensity strobe lights for simulating lightning in film. Their counter was made from four BAG END D18-E subwoofers and each time they set off a lightning flash they would play a thunder sample through the subs. It was totally random, but you could hear and feel it under all of the other sounds in the room. The lightning strobes were cool, but the subs blew us away. Now, we specify them routinely in systems for theatres and multi-purpose venues.”

Bob Kramer, director of engineering for Savi LLC of St. Louis, the subcontractor who installed the sound system, said, “It was a surprisingly easy room to tune. Everyone from the design side did a fantastic job.”

“This system is flexibility at the max,” Kramer said. “There are many multi-pin connectors so things can be patched around, some portable processor racks, one rack just full of processors that can be utilized, another rack full of playback and record devises so they can do playback from mini-disk or DAT or CD.”

“The system includes recording capability to hard drive as well as DAT or CD. It also has a Macki set-up with a digital-8 board and an HDR hard drive recorder so it can run up to 48 channels and do a pretty elaborate mix and record session,” Kramer said. “Mic boxes on stage can be split out so engineers can get a feed for the house sound and then same feed can go directly into the digital mixer for recording. They can save everything to hard drive and spit that out to a CD mastering Alesis box they have in one of the racks. I don’t think they realize yet what a fantastic system they have there.”

Kostusiak added, “I need to thank Jim Wischmeyer, president of BAG END for helping us solve a situation we ran into. The speaker we originally specified as the under balcony speaker proved to be too large for some locations due to the complex, curved shape of the under balcony ceilings. Jim shipped us a pair of TA6000-S series speakers for our evaluation, and they sounded great and we are very pleased with them. They are the smallest dual 6.5” + 1” horn system we have found for this application.”

John Cattanach, director of stage services for the center, said, “The system sounds great so far.”

Kennedy added, “We have heard nothing but praise from our audiences about the sound quality of both performance spaces in the Touhill Performing Arts Center. Performers and production companies who have utilized the system have been extremely pleased with what they hear.”

After a preview for members of the St. Louis media, St. Louis Post-Dispatch architectural critic Robert W. Duffy, reported, “Visitors heard how music sounds in the new building. The Arianna Quartet played Haydin and Debussy to great effect in the main theater. The performances . . . were perfectly audible for those stationed around the house (to test the coverage of the sound system).”