Integrators, consultants and installers are constantly tasked with finding solutions to difficult challenges. Even so, creating high quality, accurate surround sound synchronized with video playback and lighting in the depths of the World War II USS Aircraft Carrier – Intrepid may be going above and beyond the call of duty. That is just what Videosonic, a New York based systems integrator did when it teamed up with lighting designers Auerbach & Associates and content producers Chedd-Angier to recreate battle scenes for “The Kamikaze Experience” aboard the USS Intrepid.

Intrepid was decommissioned in 1974. Today, Intrepid is berthed on the Hudson River as the centerpiece of the Intrepid Sea, Air & Space Museum.

The Intrepid, now docked in Manhattan’s west side piers, was the only naval vessel to have suffered two kamikaze attacks in the same day, November 25, 1944 and its story is told from the perspective of a fireman who lost his life that day and a gunner’s mate who survived. The program is a dramatic rendition of the events of that day which, through the creative use of multiple projection screens and surround sound audio, captures the intense, visceral experience of what it was like on the ship as the planes slammed into the aircraft carrier and burst into flames. Indeed, viewers stand in the center of the hangar deck, in the very spot where the fireman eventually lost his life in the second attack.

Although this concept places viewers of the program in the center of the action, it places extraordinary demands on the system. For example, the floor of the viewing and listening area is three solid inches of hard steel – hardly an acoustician’s dream location. And because the vessel must be kept in original form, the projectors, screens and surround speakers had to be hung above the hangar deck with no ceiling modification. As for placing a large subwoofer in that environment, unobtrusively hidden next to an original WWII airplane, well, that added to the challenge. 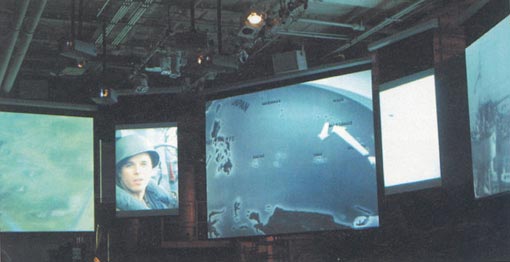 “It’s also worth noting,” mentioned Glenn Polly, owner of Videosonic, “that there would be no technicians operating the system, so it had to be automated as well. The Intrepid gets 750,000 visitors a year, is open seven days a week, 10 hours a day with this program running once an hour, on the half hour. Everything from the automation to the sound processing had to be flawless.”

Audio is played back from a Mackie 24 track digital system. The Bag End Quartz subwoofer is powered by a Crown amplifier, while the twelve Bag End T1200 speakers are powered through two Biamp MCA-8150 amplifiers. A Biamp AudiaFLEX DSP system controls the multichannel playback, executing the crossfades between the discrete channels, while eight channels of high bitrate MPEG video are sourced by a Videosonic VIDS server. SMPTE timecode on one of the video channels provides the master clock that the lighting controller and 24-channel audio player chase to maintain frame-accurate synchronization for the entire show.

The Biamp AudiaFLEX is the heart of the unique 13.1 sound system “We used Biamp,” said Polly, “because we knew that the complexity of the program and the acoustic challenges provided by the space required a powerful, flexible solution for re-configuring and tuning the system. In retrospect, the audio production would not have been possible without it.”

To create the immersive audio program, a decision was made to mix the multichannel program within the exhibit space. Normally this would provide many logistical challenges, the biggest of which is how to transport 24 audio channels from the console over 400’ to the equipment room downstairs. Even if a multipair audio snake was used, it would color the sound. The Audia system allowed Videosonic to use a single cat-5e cable and Cobranet to accomplish this during mixdown, and then permanently install both FLEX chassis and the Mackie hard disk recorder in the equipment room. What visitors hear when they experience the “Kamikaze Attack” is exactly what the production team envisioned.

The AudiaFLEX units, the video server and all the other components are housed in three Middle Atlantic racks (there are a total of 9, all set for future expansion) located below the hangar deck in a climate controlled room that also hosts the ship’s new IT technology gear.

Back up on the hangar deck where the show takes place, viewers gather around a large mural painted to re-enact one of the kamikaze attacks. Along the ceilings above the mural and attached to one of the thick steel walls of the aircraft carrier are acoustic panels, covered in material matching the subtle ivory colored interior paint of the ship and placed strategically so they won’t be noticed by visitors. This was the extent of treatment that could be done, given the demands of retaining historic accuracy of the vessel. 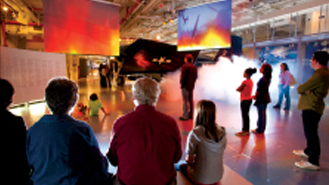 Also from the ceiling hang five Sanyo video projectors with matching screens for each discrete video channel streaming from the server. What the visitor gets on those screens and from the speakers is sometimes a single audio and video channel with an actor narrating some of the terrible events of that day. Other times it plays flat, archival news footage in black and white, while still other times the system displays 360 degrees of hot burning fire and smoke with the screams of the wounded and the explosions from igniting fuel tanks rending the air in full surround, shaking the very deck of the aircraft carrier.

The program is a steady and powerful buildup from a single gunner’s mate telling why he is there, to the climatic battle scene that shows how the crew pulled together to overcome the odds and keep the ship in the fleet for one of the biggest battles of the Pacific. Though certainly less daunting a task, the integration team worked together to solve some special challenges resulting in a successful implementation of a moving multimedia display in a difficult environment.