In the scenic Pacific Northwest, Olympia, the capitol of Washington state, is a living picture postcard. 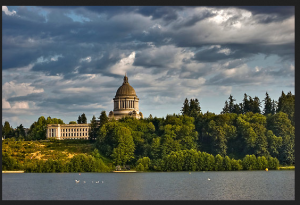 The majestic Olympic Mountains serve as a backdrop for this city of 40,200 nestled on Budd Inlet of Puget Sound at the mouth of the Deschutes River.

One of Olympia’s most picturesque locations is the state capitol building overlooking the city’s harbor. Centerpiece of the capitol is the rotunda of the legislative Building, situated between the state senate and state house chambers. The rotunda is host to numerous official functions and nearly 100,000 tourists a year.

“Our portable system was not pleasant to look at and didn’t fit into the grand atmosphere of the rotunda,” said David Boyer, captiol building electrician. “On top of that, the huge 25,000 square-foot space full of marble and plaster surfaces was not particularly cooperative acoustically.”

“We wanted to improve the sound quality, make the spoken word more intelligible and we wanted to eliminate cables lying all over the floor,” Boyer said.

The decision was made to retire the old portable system. Boyer sought help from URS Electronics in Portland, Oregon. Gary Chandlee of URS Electronics outlined the problem: “The acoustics were absolutely horrible,” he said. “They wanted a general purpose 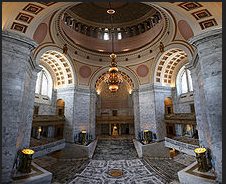 sound system that would work equally well for speeches and other ceremonies as well as light music, and they wanted it to be as unobtrusive as possible.”

Chandlee recommended BAG END TA6000 loudspeakers as the backbone of the system because of their clear, crisp sound reproduction and their small size. At 22.5 inches high by 9 inches wide, by 11 inches deep, Chandlee felt the speakers could be easily hidden or disguised to blend into the decor.

The BAG END TA-6000, is a Time-Aligned, compact high-output speaker system that offers high fidelity and high efficiency for a variety of general purposes. Because of their small trapezoidal shaped box and relative low weight of 30 lbs., they are ideal for installations such as the one in the Washington state rotunda.

“We decided that the ideal location for speakers would be as close to where the public normally congregated for functions,” Boyer said. “In the rotunda, we mounted the speakers 9 feet off the floor, at the head of the stairways leading down into the center of the rotunda.”

Because the walls were mostly marble, hiding them was an impossibility, so Boyer and his crew painted the cabinets shades of gray to match the walls, and nestled them among statuary. They used flat No. 14 clear-coat copper wire around the marble face and the speakers virtually disappeared from view.

“Not only does the system sound great,” but you really have to look hard to locate the speakers,” Boyer said. “The system really turned out beautifully.”