BEVERLEY, Wash. – The Wanapum (river people) once thrived along a stretch of the Columbia river. They were a peace loving tribe that did not fight wars with the U.S. government, and therefore required no treaty. Their desire for peace left them without a land base. Sadly, they are virtually extinct. 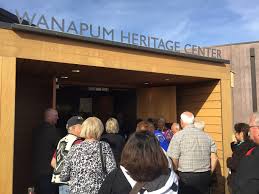 Though their numbers are decimated, they persist in a rough country of sagebrush and bunchgrass. Although their landscape has been drastically altered by the whites. Part of their story is enshrined in the small but enriching Wanapum Heritage Center.

The Heritage center installed a complete Bag End sound system for its presentation theater. CPS Electronics, the system designer, put in three Bag End CDS-110 full range systems.  They are located left, center and right behind the acoustically transparent screen. In addition, TA80-IY’s were used for rear surround sound effects. After that, the mainstay of the Bag End subwoofer line, the D18E-I, was installed providing deep base like no other can.

In the lobby sits a 29-foot canoe that Puck Hyah Toot, a prophet and religious leader, carved with the Tomanawash brothers in the 1800’s. The Wanapum people made canoes from driftwood provided by Chiawana, the Great River of life and myth, now called the Columbia. Salmon once flourished in this area and providing sustenance to the tribe. 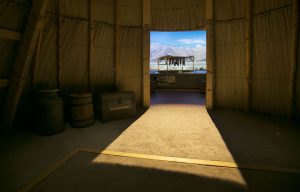 The collection includes leather, cloth, along with beaded and woven items that belonged to Martha Johnny. Martha is the daughter of Puck Hyah Toot, who is the nephew of spiritual leader Smowhalla. Some are Martha’s handiwork, and some she purchased. In addition, there are other keepsakes that were either handed down to her or acquired through trade. Also in the collection are samples of exquisitely crafted implements. For example, spoons made from mountain goat horn, bone antlers, wooden needles, delicate arrowheads and various tools made from the basalt rock prolific in the area. The items represent just a portion of the collection. The rest are secured in a repository located in the bowels of Wanapum Dam, adjacent to the heritage center. Similarly, Tule mat longhouses can be seen in historic photos and models, along with small samples of the weavings.

Wanapum’s existence was threatened when their village was set to be flooded due to construction of a dam at Priest Rapids. Negotiations with the Grant PUD resulted in relocation to their current settlement just west of the dam. In short, the PUD, Wanapum, several government agencies and the University of Washington cooperated in an “archeological salvage” operation before the flooding. A portion of this operation entailed blasting ancient petroglyphs from sites along the river and removing them to the Ginkgo Petrified Forest near Vantage. The Wanapum dreamer prophet, Smowhalla, predicted the cataclysmic changes of the past 150 years. A few changes in the area are addressed in the museums’ displays, such as the introduction of steamboats on the Columbia. Likewise, mining and great cattle herds were introduced. The later providing supply food to teeming Northwest mining camps.