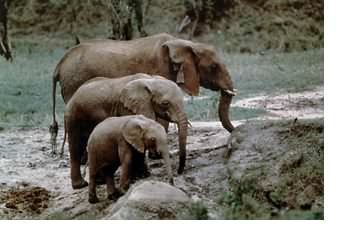 When engineers at Bag End Loudspeaker systems were developing the Infrasub-18 subwoofer system, they envisioned a wide variety of uses for it – but listening to calls of the African elephants and lions was not one of them.

Dr. Michael Garstang and a group of his students in the Department of Environmental Sciences at the University of Virginia – most notable David Larom and Robert Swap – are conducting research on the temperature and wind structure of the lower atmosphere and how it influences the use of sound by animals for communication and territory marking…

…”We think a lion calls at the optimum time of calling, when the atmosphere is best structured to transmit that call the greatest distance, to dictate its territory,” Dr. Garstang said. “So any other lion within hearing range of that call will know it’s there. One of the main objectives of our study is to establish a maximum range a lion calls, which we think is about 10Km. or about 300 square Km.”

To design the acoustic system they would need to accurately record the animal sounds, Dr, Garstang and his team at the University of Virginia allied themselves with the Laboratory of Ornithology at Cornell University and Dr. Kurt Fristrup, known for his acoustic work with whales.

“After learning what Dr. Garstang required, we consulted with audio engineer Bob Grotke of the Library of Natural Sounds, and it was our consensus that Bag End Infrasub-18 would have the best chance of reproducing a relatively faithful rendition of the wave forms.”…

…”The field check was very important because that was the only method we had to make sure we were getting what we wanted,” Dr. Garstang said. “The ability of the speaker to accurately reproduce the sound we were getting – in particular infrasonic wave forms – was critical and we selected the Bag End Infrasub on the recommendation of Dr. Fristrup’s team at Cornell, because of its low frequency capabilities – and that proved the case. The fidelity of the Infrasub was excellent; it performed remarkable well under some very rugged conditions.”

Oddly enough, when Dr. Garstang contacted Bag End, a sales person at the company, upon hearing that he planned to ship the Infrasub-18 to Africa and use it in, essentially, an outdoor situation, tried to talk him out of it. Knowing the Infrasub-18 was designed for recording studio and home theater use, the sales person feared it might not hold up in the face of some of the harsh conditions in which it might have to operate.

“Actually, he told me he thought it went down too low to be of use to us,” Dr. Garstand said. “But we told him that was exactly why we wanted it, and he finally agreed to sell us one.”

And, at times, the conditions were as billed, but the gear held up and performed in spite of wind, dust and temperature extremes….

…While working at the base camp one evening, Dr. Fristrup had an unexpected endorsement of the Bag End’s fidelity. “I performed one series of tests at full power, which included the musth rumbles of a male elephant (the musth condition is similar to a deer in rut),” he recalled. “Later that evening, we were surprised to hear a very loud elephant call right outside our compound, which suggests our experiment proved more productive than we anticipated.”