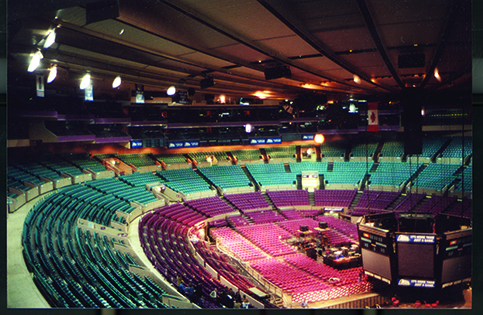 This is a panorama of the interior of Madison Square Garden in New York City, known as the “World’s Most Famous Arena.” When a replacement sound system was designed and installed for the main seating bowl, Bag End’s quad-18 Quartz high output speaker system was selected to provide the bass for the system. In all, 16 Quartz cabinets were utilized.

The “World’s Most Famous Arena” is the one New Yorkers fondly refer to simply as: “The Gaahden.”

Madison Square Garden – home to the New York Knicks of the National Basketball Association and the New York Rangers of the National Hockey League – has hosted literally thousands of events big and small, ranging from championship fights (Muhammad Ali vs. Joe Frazier) to the biggest names in entertainment (Elton John and The Grateful Dead have appeared in the Garden 52 times each over the years) to Ringling Bros. & Barnum & Bailey Circus, to the International Cat Show, and the famed Westminster Kennel Club Dog Show, to name just a few.

The present Madison Square Garden, located above Penn Station on Seventh Avenue, between 31st and 33rd Streets, is actually the fourth structure to bare the famous name. Madison Square Garden IV opened its doors in February of 1968 with a star-studded “Salute to the USO” show starring Bob Hope and Bing Crosby, and since that night some 45 plus years of events have taken place in the newest edition of the “World’s Most Famous Arena.”

When the management of Madison Square Garden decided it was time to update the sound system in the main seating bowl of the building, they called on one of the nation’s premier design and consulting firms in acoustic and theatrical systems, Wrightson, Johnson, Hadden & Williams of Dallas, Texas.

“The system they had was more than 10 years old and becoming difficult to maintain,” said Jack Wrightson, principal of WJHW. “We were hired to design a replacement sound system.”

WJHW designed a sound system that included 180 speakers and a state-of-the-art control system that allows house technicians to tune the system using presets for regular usage requirements, and to continuously monitor all devices and make instant adjustments to improve system performance immediately.

SPL Integrated Solutions, with a worldwide reputation for their expertise in audio applications, was contracted to install the system – and did so on time and under budget in spite of some extremely tight time restrictions and the unforeseen problems caused by the devastating terrorist attacks of Sept. 11 at the World Trade Center, just a few blocks away.

To do so, the SPL team called on many members of its wide-ranging team: engineering expertise from its Orlando, Fla., office; fabrication from its Mt. Vernon, N.Y., office; and installation, administrative and support services from its Columbia, Md., office.

“Teamwork is what makes any large project work smoothly,” said Felix Robinson, northeast region operations manager of SPL. “Under unique and difficult circumstances, it was SPL’s teamwork that made it possible to meet the schedule and deliver what many agree is the best arena sound system in the world.”

“We are extremely proud of the work we did on this project,” said Chad Gillenwater, president of SPL Integrated Systems. “The completion of this project on time and under budget is just another example of our ability to exceed our clients expectations.”

Equally as proud of its part in the new sound system at Madison Square Garden is BAG END Loudspeaker Systems of Barrington, IL. A total of 16 BAG END QUARTZ quad-18 loudspeaker systems supply the bass for the new sound system. That’s 64 18-inch subwoofer speakers providing the foundation for the sound that fills the arena.

The QUARTZ, loaded with four 18-inch BAG END ELF (Extended Low Frequency) drivers, is the smallest high-output concert subwoofer system on the market today, thanks to its unique design. And despite its modest size, the QUARTZ has the capability to deliver a flat response well below audible range, the lowest response of any comparable high-output subwoofer system.

“Our product is only one piece of the puzzle in the Madison Square Garden sound system, said BAG END president Jim Wischmeyer. “But the QUARTZ play a substantial role in supplying the outstanding sound quality demanded by all of those involved in developing the system – and we too are very proud of our role in not only meeting, but exceeding that expectation.”