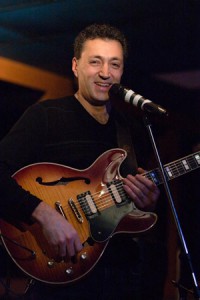 As posted in Trumpets Jazz Club and Restaurant

“I have experienced for instance Earl Klugh, Kevin Eubanks, Mark Whitfield and a few others; among them I would have to include Vinny Valentino…it is my pleasure to introduce another young genius with a brilliant tone and fresh ideas I personally welcome him to the clan-” George Benson

“Valentino does it all. He’s modern and eclectic, but also distinctive and well-rooted.” Christopher Henson, The Roanoke Times.

“That CD is smoking!!! I have a jazz program…and there hasn’t been a day that I haven’t featured this CD.” Ralph Mitchell WFSK-FM

“Valentino rips impressively alongside the healthy discipline of his four-piece ensemble – and never at the expense of them- to the delight of the listener, the material, Valentino’s vision and his band are rarely out of sync.” The Gavin Report

“Valentino doesn’t hide behind reconstituted Wes Montgomery licks like so many guitarists these days…(his are) crafty fingerings…delectable originals.” Gavin Jazz

“The music shows Vinny’s depth and abilities as a jazz guitarist that is well acquainted with all aspects of the genre.” The Mac Report

“For world-class jazz, go see and hear Vinny Valentino -you will feel that you have discovered something very important-” Cliff Johns, Old Town Crier

Guitarist Vinny Valentino continues to redefine jazz music, to the acclaim of audiences worldwide. His international debut recording, The Distance Between Two Lines, shot straight up the charts to #2 and stayed on the national charts for more than 14 weeks–an unprecedented achievement for a first international release. Paul Anthony of Jazz Unlimited called it “one of the top five albums of 1993.”

Vinny’s 1996 international release, Now and Again, extended his critical acclaim. George Benson refers to Vinny as a “young genius with brilliant tone and fresh ideas.” Vintage Guitar Magazine writes “wonderful jazz player with killer chops, wonderful compositional skills?”(March 1997). “Valentino doesn’t hide behind reconstituted Wes Montgomery licks like so many guitarists these days… crafty fingerings?. delectable originals” (Gavin Jazz, May 10.1996). Ralph Mitchell of WFSK-FM raves, “My goodness. Talk about hot house jazz, that CD is smoking!!”
Playing guitar since age six, this native Virginian began touring in a progressive rock band while still in high school. At age 16, influenced by the music of George Benson, Vinny began pursuing Jazz as a career. He recalls, “The turning point for me was hearing George Benson in concert; I had never heard anybody play like that. It was an eye-opening experience.” Vinny and his mentor have since developed a close friendship.

Vinny earned his Bachelor of Music in Jazz Studies at Howard University. He began his musical studies at Northern Virginia Community College and continued them at George Mason University before concentrating on jazz at Howard. In 1988, he released his first solo recording entitled, Vinny Valentino, and now has five recordings to his credit. Endorsements include Yamaha Guitars and Guitar Synthesizer, D’Addario strings, Cakewalk Music Software, and Bag End speakers.

Vinny appeared as a guest and guest host on BET’s “Bet on Jazz,” the cable jazz channel. He and his band were the feature performers in a one-hour “Bet on Jazz” program. One of the first musicians to perform live on the World Wide Web, Vinny continues to pioneer on the Internet (www.vinny.com). The National Endowment for the Arts and the Virginia Commission for the Arts have recognized Vinny’s talents as composer, arranger, and recording artist with a grant for a series of works entitled “New Music for Three Guitars.” He also was selected three years in a row for the prestigious Virginia Commission for the Arts Tour Directory.

Based in New York City, Vinny tours extensively, playing concerts, festivals, and club engagements around the world. Vinny and his trio were selected by the Kennedy Center and the Department of State to represent the United States in the U.S. Jazz Ambassadors Program. He and the trio featuring bassist John Benitez and percussionist Gilad toured 7 countries (Uruguay, Peru, Ecuador, Venezuela, Trinidad and Tobago, Colombia, and Brazil) in South America for six weeks playing concerts and giving music master classes. “Vinny and the group provided an eclectic combination of new rhythms and sounds mixed with old Ellington Classics that, by the end of the evening, had the entire audience clapping along in admiration and accompaniment.” (AMERICAN EMBASSY MONTEVIDEO, URUGUAY) “The Extremely talented and eminently likeable Vinny Valentino Trio gave new meaning to jazz in Ecuador.” Vinny is constantly working intensively on his own new sounds, new compositions and new recordings. Keep posted to www.vinny.com for the latest on Vinny and his music.