A Long Bar and a Narrow Room

It seems hard to believe, but even popular Chicago Cubs television personality Harry Caray needed some help to be heard over the crowd. Well, not Harry himself. His foghorn voice can be heard leading the cheers from the Wrigley Field broadcast booth almost without assistance of the WGN-TV airwaves. In this case, it was Harry’s popular near northside eatery that needed the help. His restaurant, appropriately called Harry Caray’s 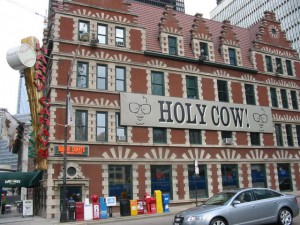 , at 33 West Kinzie St., is located in one of Chicago’s most historic structures. Most of the time you couldn’t hear the sound from the sports events on our TV sets. Just north of the Chicago River and two blocks west of Michigan Avenue’s “Magnificent Mile,” the restaurant is almost literally within shooting distance of the Windy City’s two major daily newpapers, most of its television and radio stations, and a majority of its advertising and media agencies. The building which houses Harry Carey’s was the only structure left standing north of the Chicago River following the great Chicago Fire of 1871. Originally the home of the Chicago Paint and Varnish Company, it became notorious in the Twenties as a distribution warehouse for the bootlegging network of the famed Al Capone mob.

In more recent times it had been the home of the Kinzie Steak House, until Caray’s group took it over three and a half years ago. Now it is the fourty-third largest grossing independent restaurant in the United States. “Our bar alone grosses more than most standalone bars in Chicago,” said Harry Caray’s manager, Steve Borcher. “Most of the time you couldn’t hear the sound from the sports events on our TV sets, which is part of the draw and certainly you couldn’t hear a page.” The most effective application is the one that fits the needs. Painfully aware of the need of a sound system in the bar that could be heard over the din, Borcher made calls to fellow restaurateurs. The result: “Modular Sound Systems was recommended to us several times.” The long, narrow configuration of the room, its decor, its seven windows across from the bar, and the age of the building presented some peculiar problems.

“The bar itself is 60 feet, 6 inches long (the exact distance from the pitcher’s rubber to home plate), but the room is only about 25-feet wide, ” Borcher said. “When it’s packed to capacity –  which is most nights – you can’t hear a thing. We were concerned about finding a solution that worked, “he said. After surveying the situation, Jim Wischmeyer, president of Modular Sound, and Henry Heine, Modular Sound chief engineer and designer, came up with a unique solution. We decided to make the loudspeakers part of the decor. “We ruled out the ceiling as a location for the speakers for a variety of reasons. “Wischmeyer said. “What we decided upon was to make the loudspeakers part of the decor rather than hiding them. The result was a row of loudspeakers which hang on the wall between the windows, giving the effect of antique picture frames,” he said. Modular Sound decided on six Bag End TA12 Bag End customized loudspeaker systems, installed in particularly shallow custom cabinets between windows, finished to match the decor or the room – a seeming simple, but extremely effective answer to the problem. The bar’s sound system is connected with the main sound system in the restaurant. It can be employed separately or as part of the overall system. It is also patched into the room’s video system so that all important Chicago sports events – particularly Chicago Cubs telecasts – can be heard clearly in every corner of the bar.

The bottom line: “We’re ecstatic,” said Borcher. ” The system is perfectly tailored for the situation and it does everything the Modular Sound people said it would.” Said Wischmeyer, “Sometimes the solution does not have to be complicated. After you have analyzed the problem thoroughly, the most effective application is the one that fits the needs – simple or complex.